Lois and I leave Ontario tomorrow (Sept 19) and head toward Hagerstown, Maryland. Our time in the Greater Toronto Area has been quite nice. Our first conference was with Pastor Alcock and Brampton International Baptist Church. It was an exciting conference and the church had its best attendance ever the Sunday the conference ended. Next we reported to Heritage Baptist Church in Barrie. Pastor Pennell was a gracious host and very encouraging. We ended with Pastor Wiebe of New Life Baptist Church in Maple and helped celebrate the church’s second anniversary by participating in their mission Sunday. New Life is an exciting young church.

We thoroughly enjoyed the fellowship with Pastors, church families and fellow missionaries. The campground we stayed in was quiet and relaxing. One of the best things about the trip was that we know of two souls that came to Christ on the particular Sunday I preached in Brampton.

Our truck is still in need of a minor repair. We still have issues with the heater. I had planned on picking up the part at a junk yard and complete the repairs myself when we get settled in the next campground. But Pastor Wiebe rallied his church family to give toward the need. Their generosity met the need to buy the part new and forgo the junk yard plan. We praise God for meeting our need and we head south in good health and joy in our hearts.

I emailed the believers in Tuktoyaktuk a few days ago just to keep in touch. I told them of our travels and offered encouragement in the Lord. One response came back and it touched my heart. “We pray that you will eventually become our Spiritual Leader.” This simple expression of hope affected me deeply. Would you join this believer in Tuktoyaktuk in the same prayer?

We had driven 14,164 kilometers (8,795 miles) since June 13th, most of which has been with our camper in tow. I must give sincere praise to the Lord for His watch care over us. We have had no problems with our travels at all. One day we decided to stop earlier than usual for our evening meal only to find an accident had happened on the route we were travelling while we ate. Some would call that coincidence, but I believe it is a physical peek into the realm of spiritual warfare. Thank you for praying for us.

Our reunion with family and friends has been sweet but cut short all too often. The pressing need to report to supporting churches and visit prospective supporting churches has kept us busy. In four days we will depart for Ontario to participate in two mission conferences and report to one church. We close September in Gettysburg, Pennsylvania and Hagerstown, Maryland. September started by Lois and I celebrating our thirty-third wedding anniversary. We celebrated by meeting up with family at a Cabelas in West Virginia, enjoying a meal together and spending some precious time with our granddaughters.

Our website is up and running and features a video of our ministry. Go to: iceroadpreacher.ca More content is going to be added as I provide it to Paul Conner. Paul, who is youth pastor at Greater Vancouver Baptist Church is the brains and technical maestro behind the website and video. You can contact Paul through paulconner.ca.

We have a cell phone that we carry with us while in the USA. The number is 907.347.7993. In Canada we are limited to email only. minus40@northwestel.net. Pastors, please feel free to contact me if I have not yet contacted you to schedule a meeting between now and late May of 2012.

We hear good things from the churches in the Arctic and are homesick already in a way. That is one of the most difficult things to understand and explain about being a missionary. Our hearts are truly pulled in two directions. One to the place we loved first and the other toward the place we love because of God’s love. The key to dealing with this is to accept God’s Word as our final authority. Jeremiah 17:9 The heart is deceitful above all things, and desperately wicked: who can know it? So we have to reject the deceit of the heart whether we are pulled north or south and do the task before us heartily as unto the Lord.

We again wish to express our gratitude for your faithful support and prayers. We have added 2 new supporting churches and neither one was expected or booked when we left Canada. That my friend is the result of prayer and a wonderful God.

Lois, Angie, Miss Barrie Greenfield and I left Inuvik on June 13th. 39 hours later we were in Fairbanks, Alaska. In another 60 hours I was heading for Rock Crossing Bible camp to preach at teen camp for the 8th year.  The camp staff left Fairbanks around noon and by 11PM we were approaching the camp by boat after the hour and a half portion of the trip on the Tanana River. The hearty staff roughed it at camp for 16 days, some sleeping in tents, showering with water heated on an open fire and battling the ever present mosquito hoards. 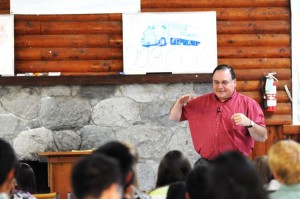 There were two weeks of teen camp, one for aboriginal kids from villages in Alaska and a couple from Canada. The other week was for the teens of Bible Baptist Church in Fairbanks. These two weeks were back to back and surrounded by the backbreaking work of a wilderness camp that had to be set up and tore down.

I am told there were many decisions at camp. I do not stay for the invitation after I preach. During a closing appeal with heads bowed and eyes closed, I turn over the service to Bro. Dean Ojala to do as the Lord leads him. Bro. Ojala is the camp director and visionary for Rock Crossing. (A vision realized by great personal sacrifice and callouses.) I leave the invitation to Bro. Ojala to conduct because sometimes teens will respond to a preacher for less than spiritual reasons. Also whether the altar is full or empty, neither pride nor pity can assault me if I remain uninformed. 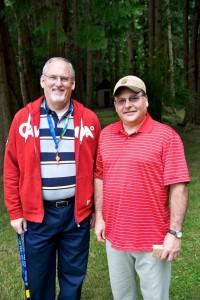 Back in Fairbanks, Lois cared for the Ojala’s home and kept things organized as 23 people passed through using the Ojala’s house as a bed and breakfast of sorts. Several eventually came to camp and some came for a door to door ministry to the Arctic villages of Alaska.
I leave for another week of camp in 5 days, this time in Vancouver BC, with Pastor Conner and Camp YES. While not nearly as remote as the Alaskan ordeal, it will be 22 days in Christian Camps this summer, and my body is in rebellion every step of the way!

The end of July will see us leave Alaska for the lower 48. By then, we will have had some important truck repair done, dentist and doctors visited and the camper prepared. Our next duty will be in mid-August to teach at Missionary Candidate School for Points North and All Points Baptist Mission. September aims us toward Ontario and October has a week of deer hunting scheduled. So yes, we are taking some family time and R&R this autumn. We are really looking forward to it.

Please pray for us as we travel. Keep Lois’ health in your prayers. Travelling is not as easy as it once was for either of us, but especially for Lois since the viral episode that took her hearing on one side and has left her with residual problems.

It is a little more than six weeks until Lois, Angie and I hit the road for furlough. In all honesty we are thrilled to begin a journey whose steps will eventually lead us to Tuktoyaktuk, but apprehensive in that the economy is volatile and fuel prices are outrageous. The last time we tried to report to our supporting churches and garner fresh support was 7 years ago. Fuel costs were at an all-time high then as well. In all candour, we need to get support from every church we have the opportunity to present our ministry to. Driving all over kingdom come and not gaining new support would be a waste of time and money. Would you please pray for a 100% success ratio in gaining support from new churches we present to? This may not seem like a high powered spiritual request, but being good stewards of God’s money is the right thing to do and becoming more important daily – for us all.

Printed on the back this newsletter is a list of needs. Often while visiting supporting churches I am asked what our needs are. I never know how to answer that. Our needs are big because our goals are big. Yet telling the pastor of a struggling work we need a bale of money seems a bit inconsiderate. Therefore I have developed a list of needs that includes huge things to little things. You can find something on the list that fits your ministry if the Lord so leads you to give. Please do not feel obligated to give anything. However, I am humbly asking for everyone to pray the Lord will provide our need.

June will bring several “lasts” for us with the ministry in Inuvik. My Last message, our last school graduation and awards service, my last Friday RU program and our last observance of the Lord’s Supper with the believers in Inuvik. Angie wants to start college in the spring of 2012 leaving Lois and I to join the “empty nest” club. These ‘lasts’ tweak our emotions because while feeling sad Lois, Angie and I also experience a bit of guilt because we look forward to the “next” thing God would have us to do.

Among all these changes, we can be steadfast because the Lord is our consistent focal point. He never changes. Our health, ministry, and home are changing. The economy is uncertain and Matthew 24 is unfolding daily in the news. But a peace is reigning over us. A God authored peace. We leave the Inuvik ministry on a high note and with tenacity cling to confidence in God. We do so with the backing of your prayer and support. May our partnership continue till Jesus comes.

In His cold but easy yoke,